I have always had a yearning to travel back in time.  I’ve had four of these experiences – well not actually going back in time, but pretty near.  The first one was years ago at the Jorvic Viking centre in York, where you travel in a car backwards in time and come out into a recreated Viking village, complete with all the sounds, sights and even the smells (including urine).  This has now changed and there is a different way to travel now, which I find disappointing – they should have left the experience alone in my opinion. 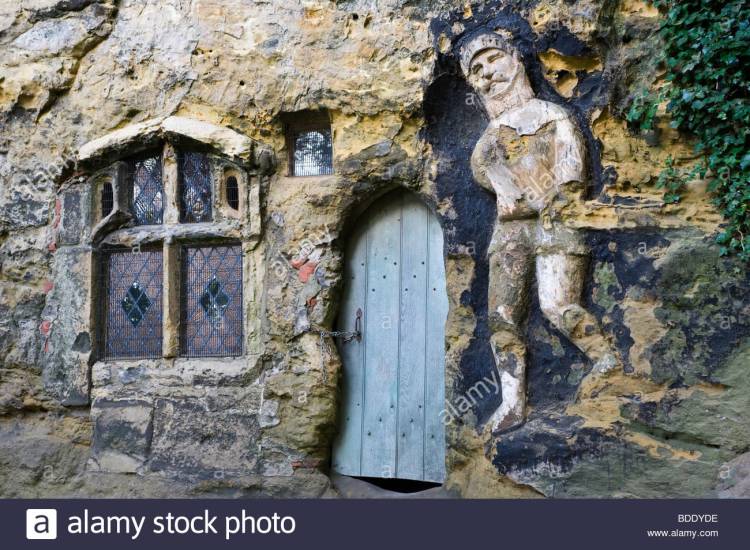 The second one was also in Yorkshire.  It was in a place called ‘House in the Rock’ in Knaresborough.  The owner Miss Nancy Buckle’s ancestor carved this house into rock in 1770 and generation after generation have lived in it.  Now that was like stepping back in time!  At the time we were shown around, the National Trust were doing their utmost to get their hands on the house  clean it up a bit and probably take the character away from what was/is  a family home. The place had a charm all of its own and I still can’t seem to find out if the Trust managed to get it. (I have since found out via the link since this post was originally written, that the owner was forced to vacate to enable renovations.  I have no information about what happened to it since).

The third time I went back in time was when I read Daphne Du Maurier’s ‘House on the Strand’.  This is a strange book even for Du Maurier.  In brief: a man rents a remote house in Cornwall (of course) and agrees to be the guinea pig for a drug his biochemist friend has invented.  With its aid he goes back in time to the 14th Century where he has lots of adventures.  But each time he comes back reality blurs between the two worlds….  the book has intrigue and a very strange ending.

The fourth time that I climbed into that time machine was last week when we visited Dennis Severs house, Folgate Street, Spitalfields, London.  I have always wanted to go to this house for years and have never quite got around to it – until last week.  We made an appointment and just went.  Dennis Severs, an American artist (b. 1948 -1999).  Severs moved to London and bought the run down house in 1979.   Folgate Street is very close to the Spitalfields market and at the time of purchase the area was more run down than it is now but attracting Bohemians and artists.

Severs renovated and decorated each of the 10 rooms  in a different historical style, mostly from the 18th and 19th century creating ‘atmospheres’ and vignettes.  He did this on a budget of £500!  I first encountered this man, years ago in a Period Living magazine and was flabbergasted at how clever, innovative and resourceful he was and longed to see his house.  Though he lived there himself, Severs invented an imaginary family to people his house,  and he based this family upon the Huguenot silk weavers who would  have lived in the area at that time.  He called them the Jarvis family – and they are still alive in the house.  Whenever you enter a room you feel they have been there before you and just left, leaving clues like a half eaten piece of buttered toast and an upset teacup behind them.  the rooms are like living paintings.  in fact one room is actually based on a Hogarth painting!

The house is crammed full of Sever’s collections of memorabilia, plus china, vintage clothing, ephemera.  But these are not dry museum type collections, these ‘props’ are scattered everywhere, as if it’s been casually left that way, nothing is ‘posed’.  Clay pipes lay broken in a fireplace, valentines are wedged into the frames of mirrors, cobwebs hang from the torn and damp velvet four-poster hangings in the poorest room in the house – the attic, where no fire burns.  To get a better idea of the experience (though I urge you to go if you possibly can)  Here is a short video starring the house – and the late Dennis Severs himself:-

History of House in the Rock

house in the Rock image

Read all about Thomas Hill, a linen weaver who built the House in the Rock  by his great great grand-daughter Nancy Buckle here.  We have quite a few pics of this house somewhere which I shall have to find.  This pic came from  here though

Unfortunately we were not allowed photographs in the house, so these images come from here,  here and here

11 thoughts on “A Collection of Time Travel experiences and ‘atmospheres’”