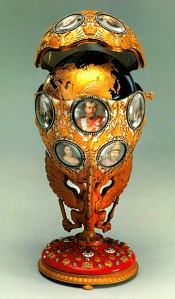 I have  not featured any jewellery on Echostains for quite a while so I have been looking for something really unusual – something that can send me into flights of fancy.  I am writing this on the birthdate of the Faberge egg (29th May  1885 – 1917), the day the Faberge egg was ‘laid’.  The Faberge egg is instantly recognisable – sumptuous, bejewelled and opulent.  These eggs were  developed in Russia by  the House of Faberge (1885 – 1917) The miniature eggs were Easter gifts, that were given singly and  were sometime worn on a neck chain.

The larger more famous eggs (also known as the ‘Imperial’ eggs) were originally made for Alexander 111 and Nicholas 11 of Russia.  Only 50 of these eggs were made, and 42 have survived.

The Karelian and Constellation eggs, planned for 1918 were destined never to be delivered.  Nicholas 11 and his whole family died in an assasination that year and  the year before Nicholas had  abdicated.  The eggs themselves are gorgeous, opulent and seen as a symbol of luxury – jewellers masterpieces.  But it is not these little baubles which once hung from necklaces which caught my eye, but this strange face distorting jewelery by Burcu Buyukunal. 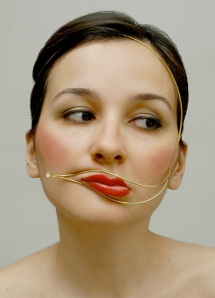 My first question is ‘why?’  How does this enhance the face?  By  distorting her face, do we then notice how attractive the woman really is?  They say that beauty is in the eye of the beholder, different ‘looks’ have their admirers, as do fashion, design ect. Maybe one day ‘beauty’ will be played down to be the new beauty. It is this example which  reminded me of how Elizabethan ladies used to paint their faces white and how patches made of velvet were used on the face in the 18th century to disguise blemishes, make the face appear even whiter or draw attention to certain facial features depending on  where they were placed.

‘Her patches are of every cut,
For pimples and for scars;
Here’s all the wandering planets’ signs,
And some of the fixed stars.’

In this very short video we see the owner of the painting ‘Une Dam a sa Toilette’ by French painter Francois Boucher (  1703 –  1770)  explain the delicate operation of patch application.  Boucher ‘s art is known for his  voluptuous and idyllic subject matter which is well suited to the Rococo style.  His patroness was  the famous Madame Pompadour, he painted many portraits of her.

There are also accessories which are used to glamourise. Whirls of cigarette smoke enveloping beautiful women in black and white movies  lend such mystique and intrigue to the silver screen. 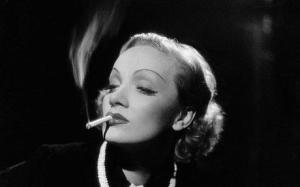 The actuality is rather different.  Cigarette Smoke permeates everything it touches, including, flesh, clothes and hair – there’s nothing mysterious about that, but I was quite tickled about this cigarette collar – though I think they missed a trick by not making it a prisoners or slave’s collar to emphasis the entrapment of the noxious weed. 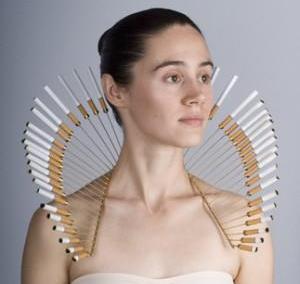 The ‘chain’ association is still there though, and there is something of the chain smoking beagle about this collar.  These types of collars are not new though – the actual shape 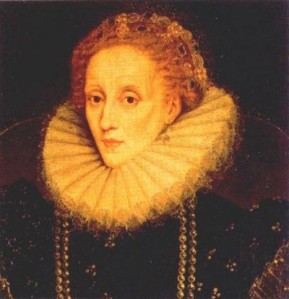 of  the ruff collar goes back to the sixteenth century and were worn by men, women and children.  The pleats of the ruff was accomplished by the use of  cone-shaped goffering irons. which were heated.  Ruffs were made from a lot of material.  Elizabeth1 had a ruff of ‘ten yards for the neck and hand’.  During starching, ruffs could be coloured with vegetable dyes, though Elizabeth herself disapproved of the light blue colour;-

“Her Majesty’s pleasure is that no blue starch shall be used or worn by any of her Majesty’s subjects, since blue was the color of the flag of Scotland”

Stiff collars, smooth complextions, disguises used as enhancements – beauty will always be subjective and is indeed in the eye of the beholder.

Lots of these beautiful eggs here

Video by AndSper with thanks

Smoking Dietrich from this article

4 thoughts on “A bit of Ruff, a bit of smooth, good patches and a golden eggstravaganza”