It’s about time we had some more unusual art on here.  A while ago I posted about  artist Willard Wigan 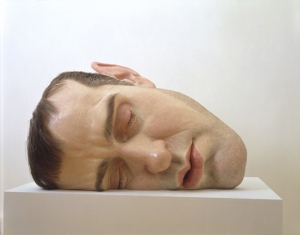 whose gigantic realistic sculptures have a unerving quality about them.

A new art form has been emerging from China over the last few years.  The process called leaf carving, involves careful precision, as the artist scrapes the outer layers of the leaf, exposing an almost transparent surface. The leaf veins are left intact to give stability to the sculpture.

The leaves preferred by artists are from the Chinar tree, which is native to India, China and Pakistan.  The leaves are considered to have ‘lucky’ qualities and resemble maple leaves and are best suited for sculpting owing to the distribution of their veins.

Each carving can take months of careful work.  But once finished, preserved and framed, the finished art should last decades.

From minute leaf sculpture to these 3D leaf sculptures.  the news may be a couple of years old, but it’s news to me:-)  Apparently a mystery artist  left leaf sculptures along the water of Leith, Edinburgh in the autumn of 2010. One of the figures was dressed in green wellies,and a flat cap.  Next to it,  two charming leaf children clung to the railings. 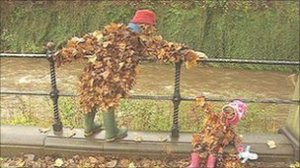 The Leith river seems to have provided inspiration for Anthony Gormley too.  You would think that  life-sized cast iron  figures would last a little longer than leaf ones, but two of Gormley’s six figures apparently fell victim to the Scottish and were pushed over by heavy tide.

Art officials have insisted that the figures were ‘designed to be tipped over’  Art lovers thought the sculptures had been stolen. 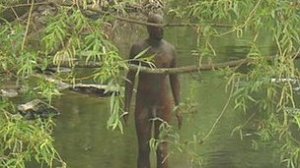 Leith locals had taken the sculptures to their hearts, donning them with bikinis, Y-fronts and even a MacDonald’s uniform!

Leaf sculpture video from hldx9 with thanks

7 thoughts on “Turning over a new leaf – or two”