I have always been a fan of abstract photography.  I particularly admire the work of German visual artist Andreas Gursky (b. Jan 15 1955 Leipzig)   Primarily he is a photographer – but it’s what he does with these photographs which makes his art so visually arresting.  His landscape colour photography is huge in scale and can be a little disorienting, whilst the vibrant colours of the photographs make his work alive and immediate. 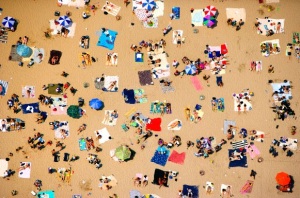 Gursky was taught at Kunstakademie Düsseldorf by German artists by Hilla and Bernd Becher –  well-known for their collaboration on photographic images of industrial buildings and machinery.  Gorsky’s photographs are big, colourful and dynamic and his subject matter includes offices, industrial plants, high-rise buildings, hotels and warehouses. The artist began digitally manipulating and editing his images after 1990, bringing out particular aspects and controlling perspective.

His work has been called ‘vast’ ‘Splashy’, ‘entertaining  and sometimes  ‘unbelievable’ by art critic Peter Schjeldahl.  But the images compositional and formal considerations have also been likened to paintings. This is what the artist himself had to say about his own work at the Gagosian Gallery USA last year;-

Space is very important for me but in a more abstract way. Maybe to try to understand not just that we are living in a certain building or in a certain location, but to become aware that we are living on a planet that is going at enormous speed through the universe. I read a picture not for what’s really going on there, I read it more for what is going on in our world generally.
–Andreas Gursky

My personal favourite work by Gorsky is 99 Per Cent.  The work started out in a 99 cent discount store. Splashes of colour are separated by columns.  The work is meant to convey the aesthetics and the structures of materialism, so it seems almost ironic that the work (a diptych), sold at auction at Sotheby’s in 2007 for a price of US$3.34 million, making it famous as the most expensive photograph in the world.  Scale plays a part in which way Gursky’s photo’s are exhibited and viewed.  For example 99 Per Cent measures 6 ‘ 9 1/2″ x 11’ (207 x 337 cm)

These fictional photographs are based on fact (his original photographs), and he has collaged these images, focusing in certain colours, altering and ordering.   We in turn participate in Gursky’s art by translating these facts.  Though his photographs convey consumerism and may have political connotations, these images are still open for us, the viewer to interpret.

other images from here and here