It’s getting a little cooler here, but no rain as yet.  The umbrellas can stay dry for the moment.  The umbrella invented thousands of years ago, but became popular in the Western world in the 16th century.It  has been used in art quite a lot, more than I originally thought.

Renoir’s Lise with umbrella was painted in 1867.   Renoir features the umbrella in his Parisian street scene ‘Umbrellas’ ,  1883.  the painting is also interesting because of the way the artist is unafraid of cutting pieces of the people from the picture – like a snapshot.

In John Singer Sargent’s  (1856 -1925) painting ‘Early Morning Walk’ the model is the artist’s sister Violet, I love the way the light plays upon this painting.

I was amazed when researching these umbrellas, just how many times Singer Sargent used these in his paintings!  Of course they’re not all umbrellas, sometimes they are parasols (to save the ladies fine complexions from the sun).  I suppose they were the first ‘sunscreen’.

Parasols as well as providing protection, were also a colourful and feminine accessory for the woman.  Even Monet painted the Lady with the parasol – and with good effect!

Parasols abound in the famous Sunday Afternoon in the Park painted by Neo impressionist Georges Seurat.  He used Pointillism –  tiny dots of colour to create this masterpiece which took him two years to complete!

But I can’t leave out Rene Magritte surrealistic ‘La Grande Guerre’ (The Big War) 1964.  This work is often compared to his self-portrait ‘The Son of Man’  this is what the artist said about ‘The Son of Man’;- 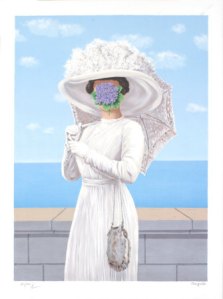 If we compare the Grande Guerre with ‘The Son of Man’ we can see a more optimistic and tranquil picture smelling of sweet flowers and hope.

9 thoughts on “Under Art’s Umbrella”