I first discovered Billy Childish a few years ago when I was researching an essay I was doing , entitled ‘Rage against the Machine’.  The essay was about artists who had raged against the ‘art machine’ and railed against the establishment. 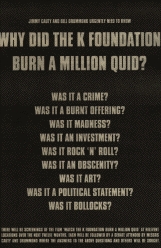 ” think we made about £6m. We paid nearly half that in tax and spent the rest on production costs.When we stopped, the production costs stopped too, so over the next few months we amassed a surplus of cash still coming in from record sales; this amounted to about £1.8m. After tax we were left with about £1m. This was the money that later became the K Foundation fund for the ‘advancement of kreation.”

The Guerrrilla Girls, masked artists who make their protests known in galleries by putting up slogans (sometimes with statistics) whose aim is more recognition for women artists.  They still get up to all sorts of activities to make their point.

Banksy the masked graffiti artist, who I’ve already wrote about here, has become very collectable now and can fill a gallery legally (as opposed to sneaking in and hanging a piece of his own art there surreptitiously)

and the Stuckists (co-founded by Charles Thomson and Billy Childish in 1999, though Childish left in 2001).  The Stuckists turn up at the annual Turner Prize to make their protests about the art school/machine process and elitism.

The term ‘Stuckist’ comes from a remark from the then girlfriend of Billy Childish Tracy Emin who accused Childish’s work of being ‘stuck, stuck, stuck’ – and the name stuck:)

Childish left school at 16, an undiagnosed dyslexic.  He studied art at St Martins college of Arts, london in 1977 but walk ed out after half a term.  He went on the Dole and painted until 1979.  He reapplied to St Martin’s in 1980.  He was there for 18 months but got expelled because he refused to paint in the school, preferring to work at home.  Plus according to him ‘they didn’t like his poems’….  Childish has always maintained that art school stifles creativity.  He did block printing with Tracey Emin in Maidstone.

His work is autobiographical and he says he is an anti-hero.  As an artist, he is prolific.  He has made over a hundred albums, many books of poetry, autobiographical, fiction.  He has produced countless paintings and woodblock prints – yet terms himself as a Sunday painter.

His work has a charm all its own and is in the tradition of Van Gogh.  It’s the basic honesty and lack of pretense that I like the best as well as the painterly qualities.  He does it because he LOVES it.  He doesn’t strive – he just does.

When we were in London we were in time to see the last day of his exhibition at the ICA.  it was the first time we’d been to that place.  it is a massive place – very modern inside and nice spaces.  An ideal venue and setting for contemporary art.  The first thing I noticed about the paintings, is that they are done on unprimed canvas!  He doesn’t waste any time in priming them.  You can actually smell these paintings, like they have only just been finished – there’s a smell of turps and oil that exudes from them. Here is a short film about Childish, it features his paintings, him actually painting and he talks about his work.  If you like this artist there are a lot of his films on YouTube

History of the Stuckists here

Stuckists and the Turner Prize demos here, image from here, Childish oil from here with article

son of art image from here

The you tube video by h4huggy thanks:)